News Too Good to Not Be True: Seeing the Cross Through the Empty Tomb

For Christians around the world who follow the traditional calendar of Christ’s Church, this is called “Holy Week,” the seven days before Easter Sunday, beginning with Palm Sunday. It is the week that marks the end of the Season of Lent and the beginning of the Easter Season, the week that includes “Maundy Thursday” and “Good Friday.” It is the week that brings the passion of Christ into sharper focus, the week that ends with the humiliation, suffering, crucifixion, death, and burial of Jesus. However, that was not the end of the story. It was just the prelude of what happened on the third day after his death.

Believers also remember what happened on the second day, Saturday, the day following the death and burial of Jesus, when his disciples were confused and cowardly. They had believed Jesus would be crowned “King of the Jews” that very week, after the royal reception of joyous cheers he had received when he entered the city of Jerusalem on Palm Sunday, “Hosanna, blessed is he who comes in the name of the Lord!” In the five days that followed, those cheers turned to jeers, leading to the scheduling of a false trial, an unjust verdict of death, the mockery of his own people shouting, “Let him be crucified!” with a cruel scourging and crowning with thorns before Jesus was made to carry his heavy cross to his place of execution.

A common saying among the Jews was “cursed is he who hangs upon the tree,” for the cross was the most gruesome means of capital punishment throughout the extensive Roman empire. It was reserved for the worst criminals, including those who were considered enemies of Rome. Roman citizens who were condemned to death were not crucified but usually beheaded. Death by crucifixion was the worst way to die – a slow painful death from the loss of blood, an agonizing thirst and dreadful difficulty breathing, finally ending in death by suffocation. Is it any wonder such victims were considered “cursed” or that the cross was considered the ugliest of all symbols? Even to this day, more than two thousand years later, the cross is still considered offensive and scandalous to many non-believers, including other faith groups. An article in a recent issue of a major religious journal reported that there was a growing protest against the practice of using the cross as a symbol to mark graves, especially in military cemeteries for those who gave “the last full measure of devotion” in numerous wars to protect and preserve our freedoms. Most people do not see the Star of David, the most common and cherished symbol of Judaism, as offensive or the crescent moon of Islam. I know of no protests to remove those symbols wherever they are found in our public life, especially in the United States where “Freedom of Religion” is one of our stated inalienable rights.

Of course, from the standpoint of art, the cross is not an attractive symbol, for it lacks all the different lines and curves that are the marks of beauty. To true followers of Jesus though, the cross is the most beautiful of all religious symbols because of what it symbolizes: the wondrous love and amazing grace of God.  A love that could be spat on and rejected and yet remain love, and a grace that is totally undeserved and unearned. We sing in faith “In my hand no price I bring, simply to the cross I cling” and “When I survey the wondrous cross on which the Prince of Glory died, my richest gain I count but loss and pour contempt on all my pride…Were the whole realm of nature mine, that were a present far too small, love so amazing, so divine, demands my life, my soul, my all.'” The Apostle Paul said, “God forbid that I should glory, save in the cross of Christ my Lord” (Galatians 6:14). Theologians may argue today about the theology of the cross and the theories of atonement, but the apostles knew that in those moments on the cross, when God seemed absent, He was really most surely present in Christ, suffering rejection for us that we might experience God’s presence, forgiveness, and acceptance. From their vantage point following the resurrection, and after the Pentecost event, the apostles had been taught by the Holy Spirit the deeper meaning of the cross.

Let us go back to those dark hours after the crucifixion, following the death and burial of Jesus, and try to get in touch with the feelings of Christ’s disciples. They were certainly not rejoicing that Jesus had endured the agony of death on a cross, “an emblem of suffering and shame” (words from the hymn “The Old Rugged Cross”). They did not know in those lonely hours in the upper room, where they had locked themselves in for fear of the authorities, that they would eventually be able to rejoice in the atoning death of Jesus. They did not understand that as Jesus hung for hours on the cross, feeling abandoned even by God the Father, it was because he had taken the burden of the sins of the whole world upon himself. In fact, the disciples could not see anything good beyond the cross. What made the difference? We know the answer because we live on the other side of the cross and are “Easter people.” But let us imagine we were present on that fateful Friday…

On that fateful Friday when Jesus was crucified, Luke tells us that “…when it was about noon darkness came over the whole land (also rendered in some translations “over the whole earth”) until three in the afternoon, while the sun’s light failed” (Luke 24:1-10). THAT WAS THE DARKEST DAY IN HISTORY! When Jesus was born in Bethlehem, heaven rejoiced, but there were only a few on earth who were aware of His birth. How could anyone have known that the hinge of history was on the Bethlehem stable, that the Light of the World was lying there in a manger, that “…the true light, which enlightens everyone was coming into the world” (John 1:9)? Then, when Jesus died on the cross, the sun’s light failed, for men had “loved darkness rather than light because their deeds were evil” (John 3:19). The powers of darkness had done their worst, the enemies of Jesus thought they had succeeded in extinguishing the light of His life, but the light “…still shines in the darkness, for the darkness did not overcome it“ (John 1:5).

When John wrote those words in the prologue to his gospel, He was standing on the other side of the cross. Yes, that black Friday was the darkest of all days, and those who had “…hated the light” and refused “…to come to the light” (John 3:20) were still rejoicing that they had put a bloody period at the end of that troublemaker’s life! They would hear no more from Him! A large stone had been rolled across the entrance to His tomb, and a Roman seal had been put there so no one would dare tamper with the tomb.

That was Saturday. But when the gospel accounts of the crucifixion were written, the gospel writers were seeing the cross through the empty tomb, for they had heard the good news, the best news this world has ever heard, announced by an angel very early on Sunday: “…at early dawn” according to Luke, “when the women had come to the garden to visit the tomb (i.e. Mary Magdalene, Joanna, and Mary the mother of Jesus), and “…they found the stone rolled away, and when they went into the tomb they did not find the body. While they were perplexed about this, suddenly two men in dazzling clothes stood beside them. The women were terrified and bowed their faces to the ground, but the men asked them, “Why are you looking for the living among the dead? HE IS NOT HERE, BUT HAS RISEN!”

On Saturday, His enemies were too optimistic and His friends were too pessimistic. His enemies were so glad, while His friends were so sad! On the cross Jesus had cried out, “It is finished!” Those words were misinterpreted by His enemies and misunderstood by His friends. His enemies were telling each other, “Yes, He is finished!” His friends were saying, “We had hoped that He would be the one to redeem Israel, but now it is finished. All hope is gone.” But on Sunday, the unexpected happened! “Up from the grave He arose, with a mighty triumph o’er his foes; He arose a victor from the dark domain, and He lives forever with His saints to reign. HE AROSE! HE AROSE! HALLELUJAH, CHRIST AROSE!” This is the faith we sing! This is why Christians worship on Sunday, the “Lord’s Day,” the Day of Resurrection. This is why every Sunday should be a little Easter!

I believe the Apostle Peter says it best in his first letter to the young church: “Blessed be the God and Father of our Lord Jesus Christ! By his great mercy we have been born anew into a living hope through his resurrection from the dead, and into an inheritance that is imperishable, undefiled, and unfading, kept in heaven for all of you, who are being protected by the power of God through faith for a salvation ready to be completed in the fullness of time. In this you rejoice.” (1 Peter 1:3-5)

So, REJOICE! For SOMETHING GOOD HAS HAPPENED TO DEATH! Christ abolished death! Christ robbed the grave of its victory! Because He lives we shall live also! Nothing in all creation will be able to separate us from the love of God in Christ Jesus our Lord, not even death. For whether we live, or whether we die, we are the Lord’s, today, tomorrow, and forever. Again I say, REJOICE! This the heart of the Easter message. However, it is not to be found in the creeds and confessions of the Church. It is not to be found in our hymns, or in our liturgies. It is only found in a personal relationship with Jesus Christ, and that is only possible by grace alone, through faith alone (Ephesians 2:8-10; Romans 8:11, 31-39). This inspires us to proclaim without any hesitation, apology, or embarrassment that THIS IS THE BEST NEWS EVER HEARD! THANK GOD WE HAVE BEEN GIVEN EARS TO HEAR! 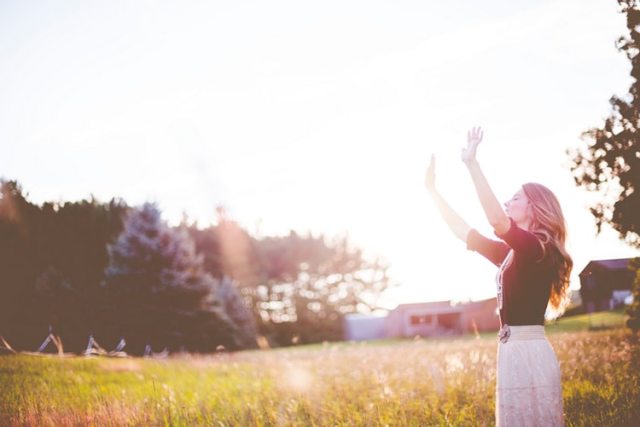 One thought on “News Too Good to Not Be True: Seeing the Cross Through the Empty Tomb”