This Is Still A “Good Friday” World, But We Are “Easter People”

Jesus warned his disciples that he was going to be betrayed into the hands of his enemies, that he was facing death, that the hour of his departure was at hand. However, he also told them that he would be raised from the dead, that he was going to build his Church, and that “the powers of death will not prevail against it” (Matthew 16:18) – that verse is also translated, “the gates of hell,” and is a reference to all of the “powers and principalities” arrayed against Christ and his Church, “the cosmic powers of this present darkness,” “the spiritual forces of evil in the heavenly places,” “the rulers and authorities” (i.e. the organized malevolent political powers and kingdoms of this world, that have declared war on the kingdom of God – Ephesians 6:12). 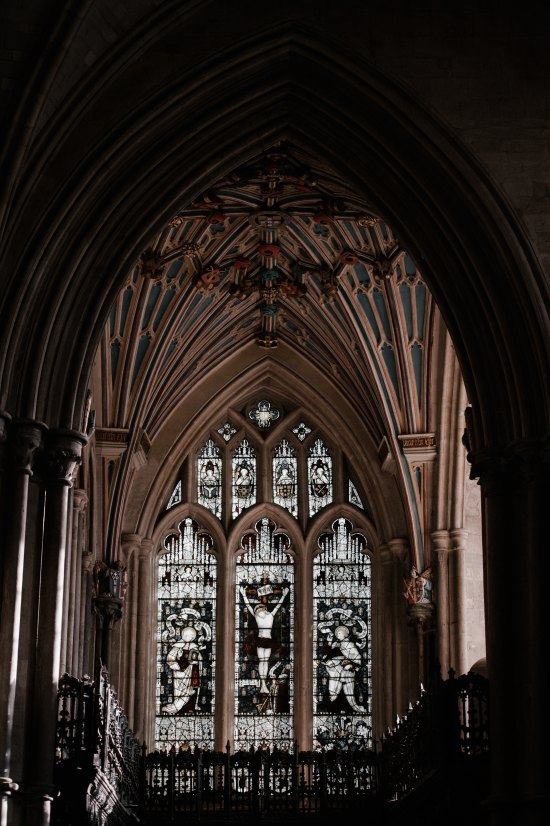 In a previous Lenten post, I listed some of the forces that have always been against everything the kingdom of God represents, the worldly powers and rulers of “this present darkness,” those in positions of authority who “…love darkness rather than light, because their deeds are evil” (John 3:19), those who “…hate the light, and do not come to the light, so that their deeds may not be exposed” (vs. 20). Not only the strongholds of evil that conspired and collaborated to put Jesus to death but the same powers that are still at war with the forces of righteousness today: all of the power abusers who use their authority to oppress the powerless, who seek to dominate and suppress human rights – political extremists, radical fundamentalists, and such deep-rooted societal evils as injustice, intolerance, racism, religious fanaticism, terrorism, militarism, an inflamed nationalism that often leads to a mob spirit.

Does that sound familiar? These are the forces that are still at work in this world today, the same powers that united on that fateful Friday more than two-thousand years ago to nail Jesus to a cross. That day was destined to become known as “Good Friday.” People are often confused and confounded by that designation. What was “good” about it? Of course, this world often calls evil good and calls good evil!  However, it was not this world, but Christ’s Church that designated that day “Good Friday.” Yes, the enemies of Jesus also considered it a good day, but for different reasons. To them, it was good because they had finally succeeded in putting a bloody period to that troublemaker’s life, while for believers it was a “good” day because it was the day Jesus prayed, “Father, forgive them, for they know not what they do.”  It was so much more than the darkest day in history because the sun was blotted out. It was the brightest and best day, for it was the day the Son of God paid the price for our salvation, dying as “the Lamb of God, to take away the sins of the world,” condemning sin and providing the only way for sinners to be reconciled to God. It was “good” because Jesus had come into the world for this purpose, to bridge the gulf between sinful humanity and a holy God, and he bridged it with his cross!

On the other hand, when we speak of a “Good Friday World,” we are referring not only to that mad mob that cried out in the first century, “Crucify him! Let him be crucified!,” but also to the same worldly powers that are still at work in the twenty-first century!

They are the same “powers and principalities” the Apostle Paul was referring to in his Letter to the Ephesians, when he admonished the believers in that stronghold of evil to resist them, to renounce them, and to “put on the whole armor of God” in their struggle against “…the rulers, against the authorities, against the cosmic powers of this present darkness, against the spiritual forces of evil in the heavenly places” (Ephesians 6:10-12). Paul wanted his brothers and sisters in Christ, fighting the good fight of the faith in Ephesus, to know that they were not just struggling against earthly powers, “…against enemies of flesh and blood,” but against the organized forces of malevolent spirit beings (compare Romans 8:38, Revelation 12:7-9). To Paul the whole universe was a battleground. The Christian life was a not a frolic, but a fight. The followers of Jesus must not only contend with the rulers and authorities of this world that are opposed to the values of the kingdom of God, but they are also involved in a mighty spiritual conflict with forces that are demonic, spiritual forces that are fighting against Christ and the Church he is building.

There are many Christians in our “enlightened age” who do not take demons and evil spirits seriously, but Jesus did and so did his disciples. However, there are not many who would deny that there are powers of evil that are active in this world. Yes, this is still a “Good Friday” world. The Apostle Paul knew Christians through the ages would need to “…be strong in the Lord, and in the strength of his power” if they were going to be able to “…stand against the wiles of the devil” (Eph. 6:1), including Satan’s use of false teachers who had been deceived by the devil’s own agents, who were denying the resurrection of Jesus, deceiving believers, and sowing seeds of discord in Christ’s Church. Paul was writing to encourage them to “…keep alert and always persevere” in defending the truth of the gospel of Christ crucified and risen, the gospel for which Paul himself was already “an ambassador in chains” (6: 18-20). Paul was probably writing from his prison cell in Rome, at a time already late in his own missionary career, calling to their remembrance how all of them had been saved “by grace through faith” (i.e. faith in Christ crucified and risen), lest they also be deceived and led astray (Eph. 2:4-13, 3:16-19, 5:6-14).

Just as the religious leaders of his own day had rejected his claims, Jesus had warned his disciples that they too would be persecuted for their allegiance to him, and it was not very long until they even found false teachers in their own midst who had already become apostles of discord in the Body of Christ. One of the first heresies the Apostolic Church found itself confronted with was the “Gnostic Controversy” (also called the “Gnostic Confusion”). In his Letter to the Colossians, Paul was referring to the Gnostics when he admonished the believers in that church, saying “See to it that no one takes you captive through hollow and deceptive philosophy, which depends on human tradition and the elemental spiritual forces of this world rather than on Christ (2:8).

The Colossian Christians were being confused by the false teachings of this group that had grown very strong in the Greek speaking world, where human wisdom was so highly regarded. The Gnostics were intellectuals who took great pride in their philosophical pursuits and arguments, insisting that only spiritual things were holy, that all physical and materials things were sordid and sinful. All earthly things were vile, including the human body, so it was inconceivable to them that God could be involved in anything of this world, which meant they rejected the incarnation (the belief that Jesus was fully man as well as well as fully God) and could not believe in the bodily resurrection of Jesus. Although most of them would not call themselves Gnostics today, there are those in the contemporary Church who have the Gnostic mentality. They do not believe that the historical Jesus was both fully God and fully man, or that he was raised bodily from the dead.

In his Corinthian correspondence, Paul addressed this issue directly in his greatest sermon on the resurrection (chapter 15, I Corinthians). He was raising the question, “What if Christ was not truly raised from the dead? What would Christ’s Church look like?  What would the message of the Church be?” Furthermore, what would the world look like? How would the impact of the Church on this world have been changed? What difference would that have made in the growth of the Church? What difference would that make in our own lives as followers of Jesus? This would still be a “Good Friday” world, and Christianity would not be a religion of the resurrection. So what? What difference would that really make? Well, listen to Paul, he answers this question, which is his own question, and he is very specific:

“IF CHRIST HAS NOT BEEN RAISED, WE ARE GUILTY OF MISREPRESENTING GOD, BECAUSE WE HAVE TESTIFIED OF GOD THAT HE RAISED CHRIST FROM THE DEAD” (vs. 15).

“IF FOR THIS LIFE ONLY WE HAVE HOPED IN CHRIST, WE ARE OF ALL PEOPLE MOST TO BE PITIED” (vs. 19) “BUT IN FACT CHRIST HAS BEEN RAISED FROM THE DEAD, THE FIRST FRUITS OF ALL THOSE WHO HAVE DIED IN CHRIST” (i.e. the first of many who will be raised with Christ, vs. 20).

FOR WE ARE ALL “EASTER PEOPLE” –

“BLESSED BE THE GOD AND FATHER OF OUR LORD JESUS CHRIST, BY WHOSE MERCY WE HAVE BEEN BORN ANEW TO A LIVING HOPE THROUGH THE RESURRECTION OF JESUS CHRIST FROM THE DEAD” (I Peter 1:1).

“DO NOT BE ASHAMED THEN OF THE TESTIMONY ABOUT OUR LORD….HOLD TO THE STANDARD OF SOUND TEACHING…GUARD THE GOOD TREASURE ENTRUSTED TO YOU” (i.e. the gospel of Christ crucified and risen – II Timothy 1:13-14).

THAT WAS THE VERY BEST ADVICE PAUL WAS ABLE TO GIVE TO HIS SON IN THE MINISTRY, YOUNG TIMOTHY, BEFORE HIS OWN DEATH AND DEPARTURE: “As for me, I am already being poured out as a libation, for the time of my departure has come. I have fought the good fight, I have finished the race, I have kept the faith. From now on there is reserved for me the crown of righteousness (i.e “the crown of everlasting life” – compare I Peter 5:4) which the Lord, the righteous judge, will give me on that day, and not only to me, but also to all who have longed for his appearing” (i.e. Christ’s second coming, His kingdom, the reign of Christ forever and ever, which is the sure and certain hope of all EASTER PEOPLE).

O Lord, thank you for the good news Easter brings, the best news this world has ever heard. Something good has happened to death! You defeated death! You destroyed death for all who believe, for all who know you live, for you live in our hearts. Let others see the difference you have made in our lives. Let them see you in us, your life incarnated in our attitudes and actions, for this is what it means to be a Christian. In your name I pray. Amen.