Ambassadors For Christ In This World

Christians around the world were saddened to learn of the death of Billy Graham. Those of us living in Charlotte, North Carolina, the city where he was born, are accustomed to hearing him called “Charlotte’s favorite son.” He was given many titles during his remarkable life, “America’s pastor,” “Advisor to Presidents,” “The greatest evangelist of all time,” but the title that best describes his life of faith and faithfulness is “Ambassador for Christ.” That is how he thought of himself, often quoting the Apostle Paul, who he himself considered the greatest evangelist in the history of Christ’s Church, “We are ambassadors for Christ, God making his appeal through us, We implore you on behalf of Christ, be reconciled to God” (II Cor. 5:20). Billy Graham knew all Christians are called to be ambassadors for Christ in this world, but all followers of Jesus do not have the opportunity God had given him to be an ambassador for Christ to the world. Not even the Apostle Paul had that privilege and responsibility!

Through his crusades, nationally and internationally, which were also televised around the world, as well as the “Hour Of Decision” broadcasts, Billy Graham was literally an ambassador for Christ to the nations, but he never thought of himself in such exalted terms. He preferred to think of himself simply as a follower of Jesus Christ, to whom God had given the “gift of evangelism.” (Ephesians 4:11-13). Everyone who knew him was aware of his genuine humility. When I was serving as pastor of Plaza Presbyterian Church in Charlotte in the late 1960’s and early 1970’s, I was honored to serve as Pastor Chairman for one of his crusades in his hometown in 1972. Years later when I was pastor of First Presbyterian Church in Honolulu, Hawaii, I was privileged to join him and a small groups of pastors in Honolulu for a prayer breakfast. He was making a trip to North Korea, not as an ambassador for the United States but rather as an ambassador for Christ, and wanted us to undergird that mission with prayer. Once again, I was made aware of his humility, as he bowed down in our presence for us to join together in praying for him with the laying on of hands. He knew that he needed the prayers of other believers for himself and the door God had opened for him to visit that  closed communist country. Knowing when believers pray that the place of “agreement” is the place of power when believers pray together, this humble servant of Jesus Christ asked for our small group to agree together that Christ would be exalted in that first missionary journey to North Korea. 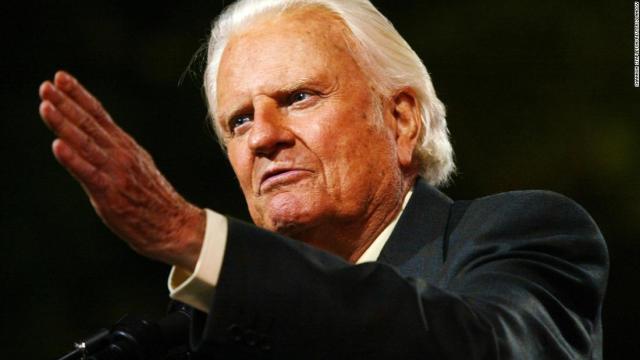 Today we know that the “underground” church (the “house church” movement) in that country is alive and well, just as it was in Eastern Europe for forty years under an oppressive communist regime, and once again that is where the leadership will ultimately come from freedom from oppression and the establishment of a new government, unless the Lord returns before that can happen. We need to remember this lesson of history: power abusers do not last forever, for the old saying is forever true, “Power corrupts, and absolute power corrupts absolutely.” Empires built on the foundation of that kind of power always fall, for they sow the seed of their own destruction. No nation is immune! Billy Graham fearlessly proclaimed, “That nation alone is blessed whose God is the Lord,”  “whatever people sow, that they shall also reap,” and “righteousness alone exalts a nation,” but more than anything else he always said he wanted to be remembered as someone who was true to his basic calling, which was to preach the Gospel of Jesus Christ, crucified, risen, ascended, glorified, and coming again in power to establish his kingdom, when the whole world will then know him for who he is.

I share these thoughts and remembrances with you as a personal tribute to Billy Graham during this Lenten Season when his life and legacy will be celebrated, because his one sustaining passion in life is also the purpose of Lent, to exalt Jesus Christ as Lord, to lift him up that others might be drawn to him (John 3:13-18;18; I Corinthians 1:17-19, 21-29). The desire of Billy Graham’s heart was always to decrease, that Christ might increase. Although he received so much recognition in his lifetime, he never sought reputation for himself, and laid all of his honors, awards, and degrees at the feet of His Lord. Now he has received the highest of all degrees, the “WD,” “Well done, my good and faithful servant, enter into the joy of your Lord” (and in the case of Billy Graham, that “WD” could also mean “with distinction”). So, in tribute to this man of God, this humble servant of Jesus, I want to share a few of THE GREAT “I AMS” OF JESUS, for Billy Graham knew Jesus Christ is perfect everything for everyone who believes:

“I AM the resurrection and the life, he who believes in me, though he die, yet shall he live, and whoever lives and believes in me shall never die” (John 11:25-26).

“I AM the light of the world; he who follows me will never walk in darkness, but will have the light of life” (John 8:12).

“I AM the bread of life, the living bread that came down from heaven; if anyone eats of this bread, that is my flesh, he will live forever” (John 6:51).

A PRAYER FOR LENT:

Lord Jesus, help me to cry out to you as the little child did when he said his bedtime prayer: “The Lord is my shepherd…he’s all I want.” Amen.

One thought on “Ambassadors For Christ In This World”