What Has Happened to America’s Conscience?

The Apostle Paul in his Letter to the Romans admonishes believers, “Be not conformed to this world, but be transformed by the renewal of your minds” (12:2). As Christians we sometimes find it difficult to not go along with the crowd. It is often hard to resist societal pressure. We do not want to appear too religious, too different from others because of our choices, our standards, our lifestyle. We are frequently reluctant to be open and honest about our true feelings. We hesitate to speak out against comments that are offensive to us, as well as practices and policies that we know are offensive to Jesus, because we lack the courage to resist the downward and backward pulls of a secular culture, a society that is usually either indifferent to Christianity at best, or at worst hostile to Christ and His way of life. Therefore, we find ourselves living in a nation that is predominantly Christian, according to surveys to determine the religious preference of most Americans, but a country that has become more and more secularized with a larger number of people who are openly anti-religious institutions, including Christ’s Church. Critics and skeptics accuse the Church of hypocrisy, inconsistency, and a failure to put the teachings of Jesus to practical use. They may be impressed with Jesus, but they are not too impressed with any of the Christians they know.

We need to acknowledge that there are indeed thousands of people who consider themselves Christians, but they are Christian in name only. They may even participate in worship with some degree of regularity, but during the week there is little or no distinction between them and the average run of decent pagans. They are not really “followers of Jesus.”  Of course, there should be no distinction between the title “Christian” and that descriptive phrase, “Followers of Jesus,” but as a matter of fact there is often a tragically sharp disparity between the two. Suffice it to say, there are too many nominal Christians, who seldom speak a good word for Jesus, in public. Too many who bear the name of Christ are reluctant to resist societal standards, and therefore remain silent when they should speak up, and who continue to be inactive when they should be servants of our Servant Lord (who was certainly counter-cultural). Therefore, we should not be surprised that Christ’s Church does not have the impact on our society that it should have, for we believers are the Church, and Christ’s Church is often discredited because of the conduct of of so many Christians. and their lack of participation in efforts to combat some of the social evils of our time. We should not be surprised when Hollywood, of all places, has now assumed the role of moral arbiter with regard to such moral scandals as the objectification and exploitation of women, harassment, sexual abuse, male domination, subjugation, intimidation, and humiliation.

Christ’s Church should have been addressing such critical social issues as the problem of violence against women, but for too many years there has been a conspiracy of silence in our faith communities, churches, synagogues, and temples. Faith leaders have too often not even believed the stories victims of abuse have shared, in the hope of finding support and safety, a true sanctuary in their own community of faith. In many instances abused women have even been shunned, which has even caused them to feel abandoned by God. Victims of abuse have frequently found themselves further victimized because pastors and other faith leaders have supported their abusers, because they were men of influence in positions of leadership in their communities of faith. Furthermore, even pastors, priests, counselors, youth workers, and other persons in positions of authority in the inter-faith community have themselves been exposed as abusers. In recent years, when the number of such revelations has multiplied, this has continued to be the sin that too many faith communities deny. Even worse, there are still far too many leaders in some of our Christian communities of faith who even abuse their wives, or their girlfriends, in the name of God because of their misinterpretation of biblical passages dealing with man’s role in marriage (patriarchal views), submission (the subordination of women, rather than gender equality and mutual submission). It is equally tragic, and terribly dangerous, that some pastors and faith counselors, even encourage victims to remain in abusive relationships, because “God hates divorce.” THE TRUTH IS GOD HATES ABUSE EVEN MORE!

So, those who should be in the forefront of those addressing the escalating crisis of sexual abuse, domestic violence, and other related issues such as human trafficking, have too often taken a back seat, leaving other groups to stand up and speak out, such as the most recent “ME TOO” women’s movement. For too long far too many churches have either remained silent or given very bad advice to victims. Of course, this is only one of many serious societal issues that we are now confronted within our common life, such as rampant racism, the abuse of power and authority in dealing with inequality, the treatment of minorities, immigration policies (especially the ill treatment of undocumented immigrants, and their children); the systemic problems of poverty, homelessness, hunger, unemployment, and crime (including the “revolving door” in our jails and prisons). Thank God for the advocates and agencies that are standing up and speaking out, but there is an urgent need for more and more concerned citizens who are willing to risk and take chances, doing things they have never done before, because they feel compelled to join the ranks of those who are willing to be transformed nonconformists (Romans 12:2), giving support to community organizers who are protesting (the word “protest” is not a negative word, meaning “against,” but rather a positive word meaning “for” – to “stand for” and “speak for” the hard right, rather than just going along with the easy wrong).

Millions of us worship the “Prince of Peace,” but by our indifference are giving support to apostles of discord and division (even unnecessary wars, as well as threats of war). We know in our hearts that racism is a violation of God’s design for human relationships, but we allow some in positions of authority to subjugate those who belong in racial groups and cultures different from their own, and even abuse them with hateful rhetoric and salacious slurs. We know there are far too many homeless people in our cities, many who have never been on the street before, and also an unbelievable number of refugees around the world, because they have been displaced, disenfranchised, and disregarded as the “least of these” (the very ones Jesus commanded us to serve (Matthew 25)).  So many among us are even prejudiced against the poor, usually offering them a “handout” rather than a “hand up,” if offering them anything at all! We know our prisons are filled primarily with the poor, minorities, the powerless, the helpless, the hopeless, the mentally ill, but we refuse to deal justly and honestly with the systemic causes of so many crimes, and just go along with the same old policies and practices, designed for punishment rather than rehabilitation and recovery. We see the rich getting richer and the poor becoming poorer, but do nothing as responsible citizens and voters to demand and support a more just system of taxation, benefits, and medical care. So the time has come for us as caring citizens and concerned Christians to not only ask, “WHAT HAS HAPPENED TO AMERICA’S CONSCIENCE?,” but to be even more specific in asking, WHAT HAS HAPPENED TO THE CONSCIENCE OF SO MANY PASTORS AND CHURCHES that they continue to refuse to take the social dimensions of the Gospel of Jesus Christ seriously, as well as the personal implications and applications of the teachings of Christ?

Furthermore, what has become of our commitment to the principals and policies that truly helped to make America great in the first place? Are we no longer concerned to be a nation that cries out to a world where so many people are victims of persecution and poverty, seeking freedom from oppression: “We welcome you to our shores. You will find a place of safety among us, a place where you can begin again, a nation offering ‘freedom and justice for all’?” It was Emma Lazarus who wrote the sonnet in 1883 to help in the fundraising effort to raise money for the Statue of Liberty’s pedestal, where these words are engraved. I believe this is a good time to print it, pro-claim it, promote it. and to be sure we preserve it:

With conquering limbs astride from land to land;

Here at our sea-washed, sunset gates shall stand

A mighty woman with a torch, whose flame

Is the imprisoned lightning, and her name

Mother of Exiles. From her beacon-hand

With silent lips. “Give me your tired, your poor,

The wretched refuse of your teeming shore.

Send these, the homeless, tempest-tost to me,

I lift my lamp beside the golden door!” 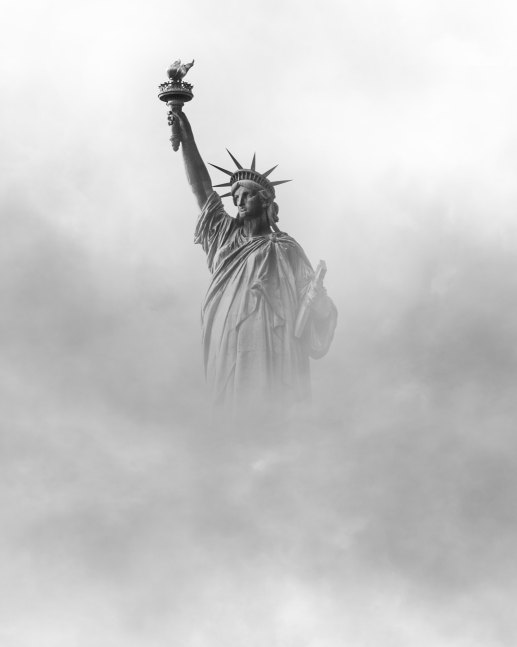 Where has all the compassion gone? In his Corinthian correspondence the Apostle Paul calls the God and Father of our Lord Jesus Christ “the Father of Compassion, and the God of all comfort” (II Corinthians 1:3-4). The meaning of the word COMPASSION is “to have a passion for” (i.e. “to feel with” or “to suffer for”), and the meaning of the biblical word for COMFORT is derived from the Greek New Testament word “fortis,” which means “strength” (the strength to stand by, to simply be there with those who need comforting, to share with others the comfort with which we ourselves have been strengthened). Therefore, as the children of God, who have been comforted and strengthened in all of our own afflictions by our relationship with God, “the Father of all compassion,” we Christians are called to identify with others in their suffering, in the name of our Suffering Lord. We have been commissioned to be a healing presence in this broken and fragmented world. We have been blessed to be a blessing!

3 thoughts on “What Has Happened to America’s Conscience?”