One of my closest friends while living in Hawaii was Bud Gaston, who had been a prisoner of war during World War II. He was a bomber pilot, whose plane was shot down over occupied France, and Bud was imprisoned in “Stalag Luft III,” which was made famous by the popular movie, “The Great Escape.” In some of our most intimate conversations, Bud shared some of his war experiences, especially his time as a POW and his own participation in preparations for the escape, including the digging of the tunnels, and his relationship with those prisoners who would be in the group using them to escape. However, more than anything else regarding his three years as a prisoner, Bud enjoyed telling me about a fellow prisoner, “Padre Mac,” a Scottish Chaplain from the Presbyterian Church of Scotland. He told how that servant of the Lord was a tower of strength for other prisoners, leading them in Bible study, praying with them and for them, and making it possible for believers to participate in the sacrament of holy communion. Prisoners would save some of their bread, and water was used as a substitute for the fruit of the vine, to be consecrated as the elements representing the body and blood of Christ. Those times of Bible study and worship had garrisoned their minds and hearts to endure their imprisonment.

Bud had shared how Padre Mac served as a caring and competent pastoral counselor for prisoners who were struggling wth mental, emotional, spiritual, and physical issues. He was also amazed at how much scripture he had memorized, since there were no Bibles available, and how selfless he was in always making himself available to American prisoners, as well as prisoners from the United Kingdom. He was greatly admired by all other prisoners, impressed by both his physical and spiritual strength, as well as His compassion and servant spirit. Bud had told me so many times that he would love to know what became of him after the war. He never knew his real name, for he was only known to everyone in the camp as “Padre Mac.” He wondered if he was still alive and perhaps serving some church in Scotland, but where would he begin to search since there so many “Macs” there – McDonalds, McKinnons,  McKensies, McElroys, McClures, to name only a few. Furthermore, he did not know his first name.

When Norma and I attended the “American Summer Institute” at the University of St. Andrews in Scotland, we had thoughts of Padre Mac, wondering if anyone there might have any clues – a Scottish minister who had served as a Chaplain during World War II, and was a prisoner of war? I also knew there would probably be as many “Padre Macs” in Scotland as there were “Pastor Bob’s” in the states. We had not had the chance to ask anyone if they could suggest a source we might contact in the Presbyterian Church of Scotland, someone who could help us in our search. In the meantime, every morning we were attending devotions in the University Chapel. We were inspired by the guest minister, one of the great Scottish preachers in Scotland, Dr. Murdo McDonald, Pastor of St. George’s West in Glasgow, and also Professor of Practical Preaching at Glasgow University. It was said that whenever and wherever he preached there was “standing room only,” throughout his long and distinguished career. His extraordinary war exploits as a paratrooper in the famous British Parachute Brigade in North Africa were also well known, as well as his service as a Chaplain in the Queens own Cameron Highlanders, for he was highly decorated. I assume by now you have probably surmised where this story is going.

One morning Dr. McDonald shared his experience as a prisoner of war during WWII, and then shared how he had been one of the prisoners who participated in the so-called “Great Escape,” made famous in a movie that is still being shown to this day. Norma and I were stunned! We looked at each other in total amazement. Could it possibly be true? Were we listening to Padre Mac? Following the devotions we introduced ourselves to Murdo McDonald, telling him we were from Hawaii and asking him if he was familiar with the name of a dear friend, Bud Gaston? We could tell by his response that he was as stunned as we were, when he said, “Indeed I am. What a surprise! Is Bud still alive?” We shared our friendship with Bud, and told how many times he had wondered what became of “Padre Mac.” That evening we had dinner with Dr. McDonald and his wife, and told them as much as we could about Bud, his leadership as an Elder in First Presbyterian Church of Honolulu, and how Padre Mac’s ministry to him, and other prisoners of war had deepened and strengthened their faith, leading eventually to Bud’s membership in the Presbyterian Church and his ordination as a Ruling Elder. We also picked his brain, so we would have as much information as possible about him, to share with Bud after we returned home to Hawaii.

Do you think that encounter with “Padre Mac” was just a coincidence – or do you believe, as we do, that the meeting was definitely pre-determined, a GOD-INCIDENT? I wish you could have been there when Norma and I visited Bud in his office in Honolulu, following our return to the islands, telling him to prepare himself for an amazing story. Of course, Bud was as amazed as we were initially after meeting “Padre Mac,” and so thankful to know he was still living. In the months that followed, he and a few other survivors from Stalag Luft III arranged a trip to Glasgow, where they were reunited with their beloved Chaplain. Together they returned to the site of the camp  where they had been prisoners, and the Mayor of the town with other citizens rolled out the red carpet. What a joyous reunion and celebration that was! There is a museum in that town today, and some of the items from the “Great Escape” are on display, including a German officer’s cap that Bud made, which had been worn by another of the prisoners who escaped, one of the few that were not recaptured.

There is a sad ending to this story. After my retirement, following interim ministries in northern California and England, Norma and I returned to Charlotte, North Carolina, where I had served a church as a young pastor in the late 1960’s and early 1970’s. Having deciding this is where we would live in our retirement, we purchased a home and enjoyed renewing friendships in the “Queen City” (named for “Queen Charlotte”). We were missing our friends in Hawaii, and especially the cross-cultural environment and multi-racial and cultural congregation we had served for sixteen years. One day we were saddened to receive a call informing us of Bud Gaston’s death. One of the hardest things about growing old is the loss of so many friends. It seems someone we know and love is always dying, either here or elsewhere in the world where we have lived and served churches we grew to love (in Kentucky, North Carolina, Texas, and Hawaii – as well as nine interims completed since my official retirement in 1993). Bud is only one of many friends who have died in the intervening years, but one of the hardest to bear. He and his wife had planned to retire in Tennessee, her home state, and we had looked forward to sharing more good times when they too were settled back on the mainland. I agreed to conduct the celebration of Bud’s life, and four buddies who were prisoners of war with him also shared in the service of loving an grateful remembrance. We also remembered and thanked God for the ministry of “Padre Mac.” 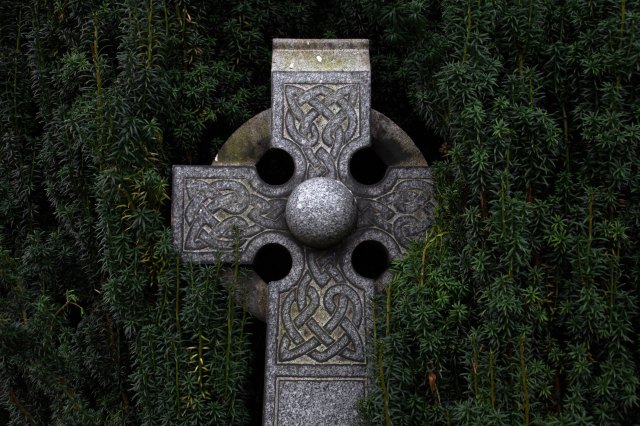 We were wishing Murdo McDonald could also have been there, but his membership had also been transferred from the Church Mortal to the Church Triumphant, where he and Bud enjoyed an even more joyous and glorious reunion in the kingdom of heaven. Thanks be to God for the life of two servants of the Lord who served Christ’s Church with fidelity, who served their countries with distinction, and “whose works do follow them.”