The Mystery of History (His-Story)

J.B. Phillips wrote a book years ago entitled, Your God Is Too Small. There are many different views of God, conflicting opinions with regard to God’s nature (i.e. God’s attributes, God’s character), as well as God’s works (i.e. the acts of God, in history, and in our lives). There are so many gods and goddesses out there in this world (little “g”), such a puzzling and contradictory array of religious beliefs, that it should come as no surprise to anyone that multitudes of people are terribly confused when it comes to theology and spirituality. HOW ABOUT YOU? Have you truly thought your own way through to any overpowering convictions about God (capital “G”), what God does do and will not do?

Do you pray? If yes, then let me ask, “What kind of God are you praying to?” An all-knowing God (with the confidence that the God you are addressing is the one true and living God, the One from whom no secrets are hid, the One who knows all about you)? An all-powerful God (i.e. a God for whom there are no impossibilities, an unlimited God, a God who works wonders), a God who is also omni-present (i.e. present everywhere, with the understanding that you cannot go where God is not; that it is impossible for you to ever run away from God)? Are you praying to a God you believe cares about you, a God who is aware of your needs even before you ask? Do you pray with the understanding that prayer is a conversation between two persons who love each other? Yes, a conversation (i.e. not a monologue, but a dialogue). PRAYING IS NOT JUST TALKING, BUT ALSO LISTENING, listening for the voice of a God who speaks, a God who is real person, but not as we normally think of persons, with bodies (i.e. physical beings), for “God is Spirit” (John 4:24). 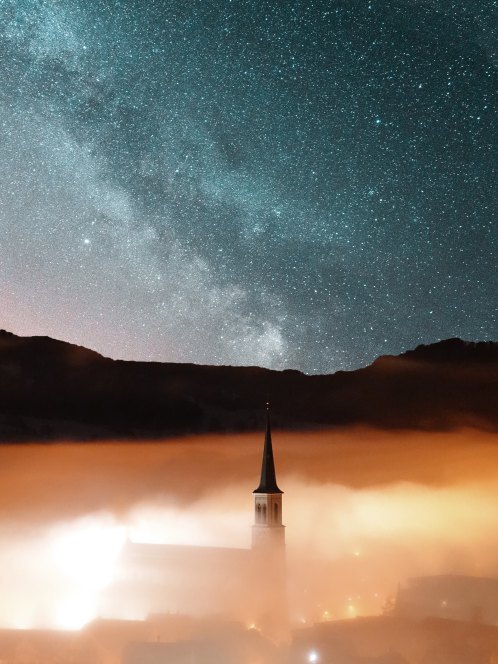 Therefore, God is invisible. However, that does not mean God is impersonal (only a power or force) as we have been led to believe in writings and movies like “Star Wars.“ God is more personal than we are, in the truest sense of the word (i.e. a thinking, feeling, loving, caring, active, relational being). Although we humans are physical beings, we too are also spiritual beings, created in the “image of God,” capable of knowing God. The Bible begins with the story of creation, including the creation of humankind, so we will know our primary reason for being is to have a personal spiritual relationship with our Creator (Genesis 1:26 – the Hebrew word that is translated “image” can also be rendered “likeness,” not referring to physical appearance, but to relationship and activity). Do you pray with this understanding? The most important purpose of prayer is to cultivate, maintain, and enjoy an intimate relationship with God, the God who has been active in history from the beginning, in the history of His covenant people, in the lives of believers. God is not only the Maker of time, but also the Master of time – not a creature of time, for times change and God is unchanging. God acts in time and space, but He is not a prisoner of time and space. God works in time, but God is timeless. God is infinite and eternal, with no beginning and no end, but He works in our lives from beginning to end, always working in all things at all times for our good (Romans 8:28). DO YOU BELIEVE THIS?

I ask this questions because there have always been those who say they believe in God, but do not really believe God is active, that God is the God of history. History is HIS-STORY (salvation history), the story of the mighty acts of God in history. One of the first heresies in the history of Christ’s Church was the Gnostic controversy. The Gnostics prided themselves on their pursuit of knowledge, believing in the prevailing dogma of the Greek-speaking world: the superiority of wisdom (human reason). They also believed that only the “spiritual” was good, the “physical” world was evil. This included the physical body. Everything “earthly” was sinful, and there was no way to bridge the gulf between the physical world and the spiritual worlds to the Gnostics.

Therefore, It was inconceivable that God, who is Spirit, could be involved in this vile and depraved world. So they did not believe in the God of his-tory, who actually visited this planet. They could not accept the orthodox view of the incarnation, that the Eternal Christ who took human form was both “fully God” and “fully human.” They accepted Jesus as pure Spirit, who only appeared to have a body. To illustrate this, they said He did not leave footprints on the roads where He walked. So He was not really one of us, one who shared our humanity, and is thus “…able to identify with us” in our afflictions and temptations, as the New Testament claims (Hebrews 4:15-16). In the fourth gospel the Apostle John announces that the divine “Logos,” the creative Word of God, by whom all things were created “in the beginning,” the One who was “with God” from the beginning, and who “was God” from the beginning (John 1:1-3), was born into this world just as we were. He “became flesh, and dwelt among us full of grace and truth” (vs. 14). The Greek word translated “dwelt”  literally means “tabernacled,” but the Gnostics could not accept the idea that the Eternal Christ would have chosen to make sinful human beings His “dwelling place” (i.e. make our hearts His home, His temple, a “temple of the Spirit” – I Corinthians 3:16).

The number of Gnostics increased at an alarming rate in the first century, perhaps because they were seen as great intellectuals, and many seek the company of such scholars who are critical thinkers. You may be wondering if there are any Gnostics in the twenty-first century church. Well, they may not call themselves “Gnostics,” portraying themselves as advanced biblical scholars and historians in search of the “real Jesus.” However, for all their scholarship and integrity, they do definitely have a Gnostic mentality, for they reject the idea of actual divine intervention and involvement in creation, or in our own personal lives, except in a devotional sense. Their message, with some notable exceptions, is very similar to that of those first-century Gnostics when it comes to belief in a “God–man” (i.e. fully God and fully human), raised bodily from the dead, who appeared bodily to His followers after His death – the “same Jesus” who ascended visibly (bodily) into heaven, and who will return to this earth “the same way,” at a time known only to God the Father (Acts 1:6-11) – all this occurred, and will occur, in time (i.e. in ordinary time, but in an extraordinary way).

But to these critical thinkers, with the tools of “higher criticism,” such things are considered impossible, for they violate natural law. Also, the thought of the divine intersecting time is simply inconceivable, for they do not believe in a God who literally acts in history, a God who works in mysterious ways. As for myself, I must ask how the God they say they believe in can possibly be the God revealed to us in scripture, in the Old and New Testaments, for this God is definitely the God of history. Their god is indeed too small!  Are you praying to their kind of God, or to the God revealed to us in the Bible, the God of Abraham, Isaac, and Jacob – the God of Moses, and of the Exodus – the God of the prophets – the God and Father of our Lord Jesus Christ, and our Father in heaven – the God who created the heavens and the earth, the God who created time and who invaded time, time and time again – who is not a creature of time, but the Master of time (in control) actually involved in the times of our lives – the God who is sovereign, always working His purpose out in the whole of His creation, according to the purpose of His own sovereign will.

These critical thinkers to whom I have referred will say, “The question is not could God intervene (“interfere” is the word some prefer), but should He? Does it strike you as arrogant and presumptuous that anyone could even ask such a question, implying that we mortals have the right to say what an immortal God should or should not do? To make matters worse, does such a mindset sound blasphemous to you? If the God anyone believes in is the Mighty Maker of all created things in the heavens and on the earth, how then could anyone ever consider any act of God “interference” (involvement in His own creation)?

Since this series of posts is concerned with acts of God, events which I have been referring to as GOD-INCIDENTS, these are questions for which we must find our own answers, as we think our way through to convictions that prompt our prayers and guide us in our prayer life, especially prayers of petition and thanksgiving. Stop and call to remembrance some of the events in your life that you simply cannot accept as “coincidences” – happenings that are mysterious, too incredible to be explained apart from God, the God of history, including your own history – the Creator of time, including the times of your life. If you do not believe that God is active in your life, then why offer prayers of petition? It is not enough to just believe in God; we must also believe God rewards prayers of faith (Hebrews 11:6). Most  believers, if not all believers, can testify to the fact that God is always pleased to honor faith often in surprising ways. However, most of us are reluctant to share too many of our own personal experiences that have proved God’s faithfulness. I have always hesitated to be too personal in my preaching and teaching, but in these latter years, I have felt compelled to record some of these happenings, with the hope my sharing might encourage and strengthen the faith of some who read these posts, and for my family become a part of my legacy.

My future posts in the next few weeks will include more GOD-INCIDENTS in my own life, and I hope you will better understand my motivation after reading this, as well as the previous few posts, for I have been laying a foundation that will undergird what is to follow – bearing witness to the fact that the history of every believer is really HIS-STORY. For God is the main actor in the drama of our lives as the people of God (I Peter 2:4-10).